What a weirdo: How the /analyze switch changes its behavior depending on its environment

While /analyze is very useful indeed, it was only available in the top SKU – the Standard and Professional versions of Visual Studio lacked support for this compiler switch (this has changed by now, Professional now also supports this feature). As some smart people quickly figured out though, the compilers shipped as part of the Windows SDK did support /analyze, too.

So given that some compilers do support /analyze while other do not, you may well expect that there are two slightly different types of binaries, one that the SDK and VSTS uses, and one that is shipped with other Visual Studio SKUs.

At least this was what I expected. As it turns out though, this is not quite the case.

For the past two years, I have been developing using Visual Studio 2005 Team System along with Windows SDK 6.0 and WDK 6000 on a Vista x64 machine. Using this setup, I was able to use the /analyze switch in both, “regular” Visual Studio projects and WDK (build.exe-driven) projects. That led me to the conclusion that the WDK 6000 compilers, like the SDK compilers were in fact /analyze-enabled binaries as well.

Then I set up a build server, installed WDK 6000 and Windows SDK 7.0 and attempted to perform a build – to my surprise, though, I got plenty of complaints about the /anayze switch not being supported.

I verified that the right compilers (WDK 6000) were used and compared cl versions between the build machine and my development machine – both were 14.00.50727.220, so everything seemed right. Running cl.exe /? on both machines, however, I noticed that despite versions being the same, this Code Analsis section was missing in the output on the build machine:

So obviously, Code Analysis support is enabled or disabled depending on external factors – not the binary itself, but the environment somehow determines whether the /analyze switch is supported or not.

Observing cl.exe /? with Process Monitor on my development machine resulted in the following output: 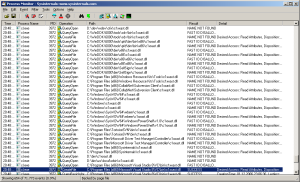 This trace leaves little room for interpretation: The code analysis features must (mainly) be implemented in c1xxast.dll. c1xxast.dll, however, is not shipped with the WDK itself, nor is it shipped with the non-VSTS SKUs of Visual Studio. So by default, the WDK’s cl will fail to locate the DLL and will revert to “/analyze-disabled mode”.

If, however, you have VSTS or the Windows SDK installed on your machine and your %PATH% happens to include the right directories, cl’s search for c1xxast.dll will succeeded and – tada – /analyze suddenly works. On my development machine, this obviously was the case, whilst on the build machine, it was not.

I added the Windows SDK’s bin directory to the build machine’s %PATH% and rerun the build. As I expected, /analyze now worked fine – what I did not quite expect though was that I was now getting dozens of compilation warnings like:

The really, really cool thing about cl being able to work with a newer c1xxast.dll is that you can continue using WDK 6000 or 6001 (with W2K support!) and still benefit from the latest-and-greatest static code analysis features.

**The ugly thing about this, however, is that a tiny change in the order of directories in %PATH% can suddenly make a huge difference w.r.t. code analysis. ** This is not quite what you’d normally expect.

(The additional compiler warnings, by the way, were a result of the improved analysis checks in cl 15: cl 14 routinely failed to verify the usage of __in vs. __in_opt parameters; cl 15 has become much more precise here and found several mis-attributed function signatures.)