When you attach a service account to a virtual machine (VM) in Google Cloud, applications deployed on the VM can access the metadata server to request access tokens or ID Tokens for the attached service account.

By default, access to the metadata server is not limited to any specific process or user on the VM: even processes running as a low-privilege user such as nobody on Linux or LocalService on Windows have full access to the metadata server and can obtain tokens for the service account. Allowing all processes and users to request access tokens can unnecessarily increase your attack surface – particularly if the service account is highly privileged and the VM runs a large number of background processes.

Fortunately, both Linux and Windows Server let you configure user-specific firewall rules. You can use that capability to limit metadata server access to specific users while disallowing access for everybody else.

Let’s see how we can set this up on a Windows Server VM. 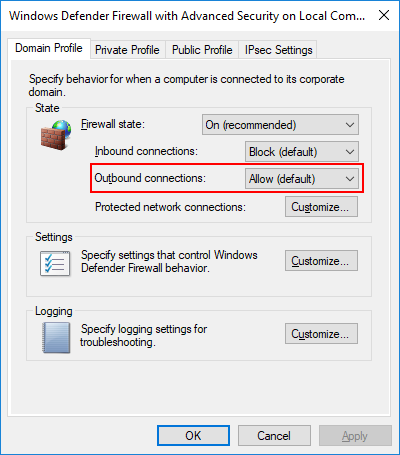 In addition to these defaults, Windows Defender Firewall comes with a number of pre-configured firewall rules that – depending on the profile – allow inbound connections for incoming requests.

Because outbound connections are allowed by default, there is typically little reason to have additional allow-rules for outbound access. To account for the possibility that a user changes the default setting however, Compute Engine creates a rule that explicitly permits outbound access to the metadata server on 169.254.169.254:

This firewall rule is not created during startup or sysprep, but during the creation of the image. It’s therefore safe to change or delete the rule – Compute Engine won’t try to restore it to its default.

Most firewall solutions use priorities to control the sequence in which firewall rules are evaluated. To grant metadata server access to selected users while disabling access for everybody else, you might be tempted to create two rules:

First, let’s create a local group for all users who should be allowed to access the metadata server:

Now we replace the default firewall rule created by Compute Engine by a new rule that only allows access to the Compute Engine Metadata Server Users group:

In the MMC snap-in, the resulting firewall rule and security filter looks like this: 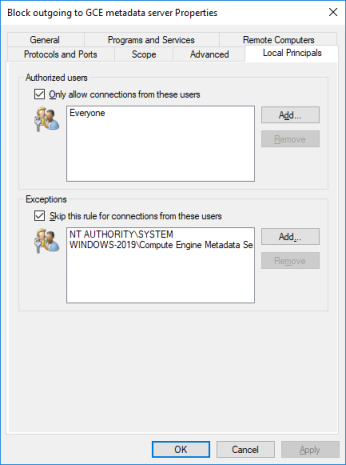 With the firewall rule in place, we can now verify whether it works as expected.

If we log in with a user that is a member in the Compute Engine Metadata Server Users group, accessing the metadata server works fine as usual:

However, running the same command as any other user now results in an error:

Thanks to Marco Ferrari for reviewing this blog post.