Today, I released version 2.16 of IAP Desktop. This new version brings a couple of new features.

When you loaded or refreshed the Project Explorer tool window in previous versions of IAP Desktop, the application displayed a “Loading…” window for several seconds while the data was being loaded. The more projects you added to IAP Desktop, the slower (and more annoying) this behavior could become.

In the latest version, I changed the tool window to work entirely asynchronously – any loading or filtering activity is now run in the background while the UI stays responsive. This change lets IAP Desktop start faster, and also allowed me to add two new features:

In version 2.16, the Tools > Options > Terminal dialog now lets you select any mono-spaced font family and change the font size for your terminal windows. The dialog also displays a little preview of how the terminal will look like: 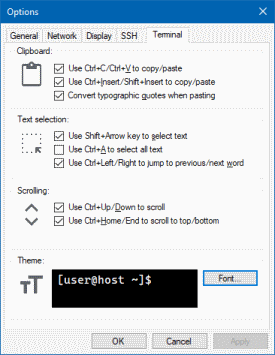 As always, you can find the source code and all releases of IAP Desktop on the project’s GitHub page.