The first thing we often do after creating a new Windows VM on Google Cloud is join the VM to Active Directory. Typically, this entails the following steps:

This process is tedious. And if we forget to perform step (4), we’re also leaving an enabled local administrator account behind.

One way to make domain joining less painful is to automate it. But that requires a bit of setup work, so it might not be suitable for all projects.

Another way is to use IAP Desktop’s new Join to Active Directory feature which we can find in the context menu of the Project Explorer window:

This feature doesn’t require any prerequisites on the VM and works for both Managed Microsoft AD domains and self-managed domains (assuming we’ve set up Cloud DNS properly).

Google Cloud doesn’t provide a way to remotely execute commands on VM instances, so the feature works by using a temporary startup script:

The following sequence diagram shows the process in more detail: 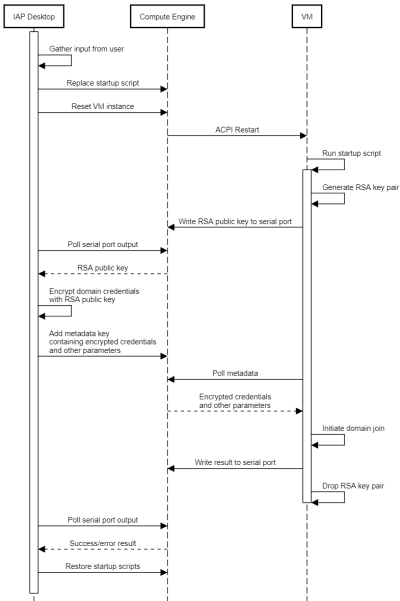