Version 1.2 of JIT Access now supports multi-party approval: When granting eligible access, we can now decide whether to allow a user to activate the access by themselves (self-approval), or whether they need approval from another user (multi-party approval).

JIT Access works by adding the notion of eligible role bindings to Cloud IAM. Unlike a regular IAM role binding, an eligible role binding doesn’t grant the user access to a project yet: Instead, a user first has to explicitly activate the binding by using the Just-In-Time Access application. Activation is temporary and requires the user to provide a justification (like a bug or case number).

Multi-party approval is handled on a peer-to-peer basis:

The approval process is driven by email, as illustrated by the following example: 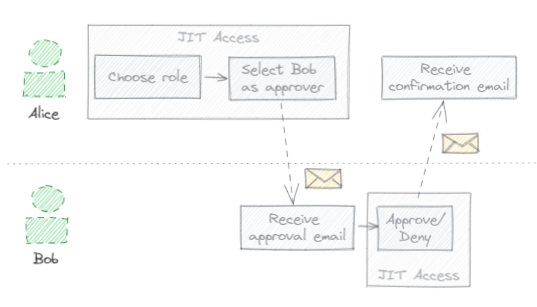 Multi-party approval is an inherently stateful use case, and the obvious way to implement it would be to let JIT Access maintain a database of approval requests and their state. However, JIT Access doesn’t have a database and doesn’t maintain any state: The application is stateless and only operates on IAM policies. This is for two reasons:

To maintain its stateless nature, JIT Access uses email in combination with a signed token (“activation token”) to pass state information between parties. The following sequence diagram illustrates how that works (with some details omitted): 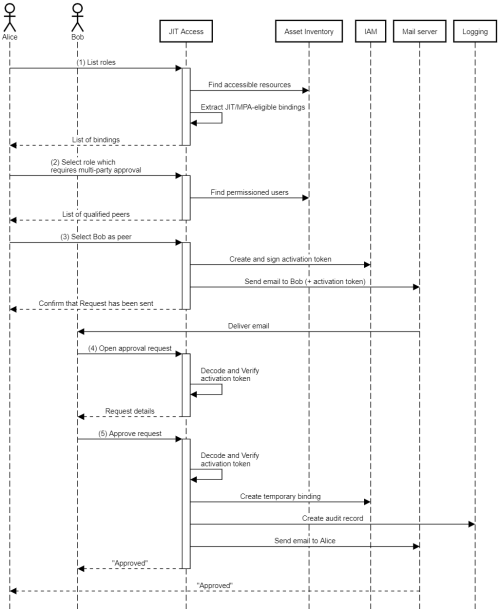 The token- and email based approach avoids the perils of using a database and maintains the stateless nature of the application. It does however also come with a few limitations:

For now, multi-party approval is an optional feature that’s disabled by default and requires some extra configuration to enable.