One of the features introduced back in cfix 1.2 was the ability to customize test execution with the command line parameters -fsr and -fsf. Using these switches can make your test runs more effective and can help simplify debugging – so it is worth spending a minute on this topic. 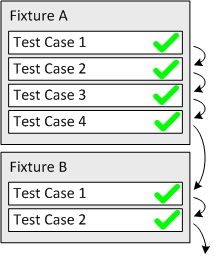 Things get interesting when one of the tests fails: Let us assume Test 2 of Fixture A leads to a failed assertion. The default behavior of cfix, which equals the behavior of JUnit and NUnit, is to report the failure and proceed with Test 3 of the same fixture: 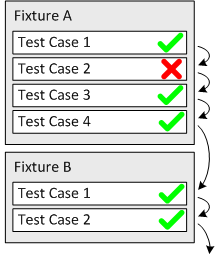 In many cases, this is the appropriate thing to do – letting the test run to completion and figure out the reasons for the failure afterwards. But in certain scenarios, resuming with Test 3 might not be the smartest thing to do – rather, as soon as a test fails, execution should proceed with the next fixture. This is what -fsf (“short-circuit fixture”) does: 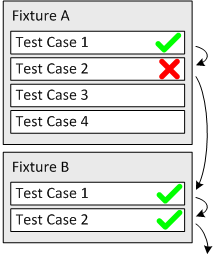 Once a test case has failed, all remaining tests of the same fixture are skipped.

When debugging, even resuming at the next fixture is often not desired. Rather, as soon as one test fails, you may immediately want to take a closer a look at the failure, so resuming the run is mute. -fsr (“short-circuit run”) does right that: It aborts the run immediately. 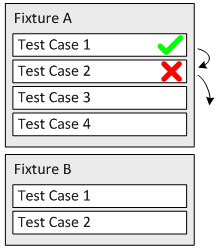 By the way – in Visual Assert, you can quickly access these options in the Options menu in the Test Explorer window: