When we bring our own Windows licenses (BYOL) to Google Cloud, we must keep track of the number of physical servers that we’re using those licenses on. That’s because Windows Server is licensed by core and not by VM.

By using sole-tenant nodes, we can control which nodes our VMs run on. A node is an abstraction of a physical server and at any point in time, a node corresponds to exactly one physical server. But the association between nodes and physical servers can change over time: over the period of, say, 3 months, a single node might correspond to 2 different physical servers.

If we know the placement history of all our sole-tenant VMs, we can accurately identify the number of physical servers that were used at any point in time. But how can we identify those placements?

Whenever Compute Engine places a sole-tenant VM, it emits a NotifyInstanceLocation log record to the audit logs. This record contains the VM’s instance ID and a server ID that uniquely identifies the physical server.

Each NotifyInstanceLocation identifies the beginning of a placement.

Doing this kind of audit log analysis gives us precise results, but it’s tedious and time consuming to do without proper tool support.

License Tracker is an open-source tool I recently published that automates the process of identifying placements by analyzing audit logs. It then writes its result to BigQuery which lets us further aggregate and analyze the information to infer licensing implications.

Technically, License Tracker is a command line tool, but it’s intended to be used in concert with Cloud Run, BigQuery, and DataStudio: 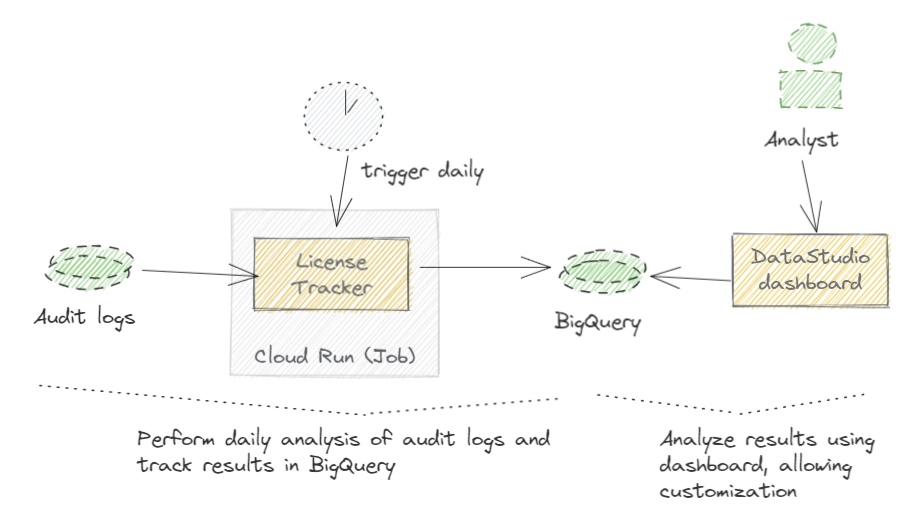 Here’s a screenshot from the DataStudio dashboard, showing the number of VM instances, sole-tenant nodes, and cores to-be-licensed:

To find out more about how to deploy and use License Tracker, see Track VM and sole-tenant node usage for license reporting in the Google Cloud docs or check out the GitHub repository.

For a full list of articles I’ve published on the Google Cloud website, see Articles on cloud.google.com.

Johannes Passing lives in Melboutne, Australia, and works as a Staff Solutions Architect at Google Cloud where he focuses on Identity and Access Management (IAM).

As a Solutions Architect, Johannes’ work is split between working with customers, creating tools, and contributing articles to the Google Cloud website and blog. He is also the author and maintainer of IAP Desktop, an app for zero-trust RDP and SSH access to Linux and Windows VMs on Google Cloud.